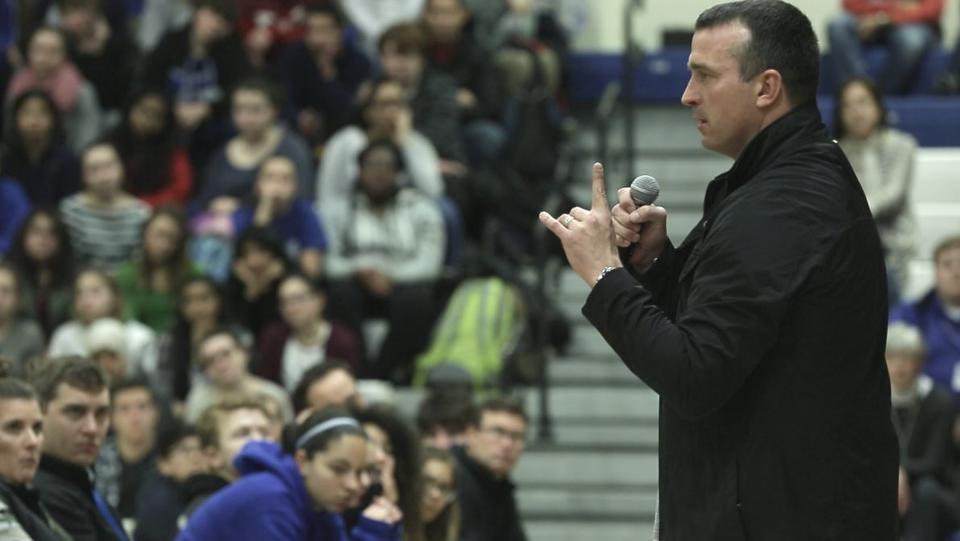 Chris Herren Cuts Deep With Students Through The First Day

By Omaid Homayun – Herren’s meteoric rise and tragic descent in the NBA because of his drug addiction was publicized in the ESPN 30 for 30 film titled, Unguarded. His story is fascinating because in his own words, he went through hell and back. Tragically, his seven-figure salary financed his addiction and he found himself hawking drugs on street corners before games. His career fell off a cliff and he had little resemblance of being a dad to this three children. After his last heroin overdose, the cops told him he was dead for 30 seconds after he was revived. Once the hero of Fall River, his life was unraveling in public shame.

While his memoir reads like an endless tragedy, Chris was finally able to turn his life around. Since then, Chris has been sharing his story and his focus has been to help others through his treatment center in MA. What’s extraordinary about his message is that it’s evolved to strike a chord with middle and high school students to address their struggles whether it be substance abuse, self-harm, or bullying. In his talk which has been produced as a new film titled, The First Day, he states that parents are present for students as it relates to their academics, but they forget to be there for them socially. He questions their presence and supervision on the weekends – when the kids need it most.

Through speaking to over one million kids, Chris has learned that not everyone has parents present and that the responsibility needs to be shared with the educators who spend extended time with them. While many private schools have counselors and wellness classes, Chris believes all students should have access to these resources to help them through their teenage years where they are most vulnerable.

He explained to me that his message to students was born through deep reflection when CBS This Morning asked him to write a Note to Self for their popular segment.

“They said 500 words is not that difficult, you just have to write it and read it on camera. In my mind I just wrote a book and was featured in a documentary, this should be easy. But getting in touch with my younger self, feeling those feelings, and retracing my steps is the hardest thing I’ve ever done. That’s the moment when I discovered we need to focus on the first day, not the worst day. We need to talk about the beginning and not just the end.”

The First Day is a remarkable documentary produced by award-winning film maker, Jonathan Hock. The inspiration came from Robert Drew who produced the 1964 documentary about JFK’s funeral titled, Faces of November. The film focuses on the faces of all the people who lined the streets to attend his funeral.

“Those faces told the story. The story wasn’t about the tragedy. It was about understanding what was going to happen next?” Hock explained.

“With our drug and alcohol epidemic in our country today, the question that The First Day asks is not about Chris Herren. The question is written on the faces of these kids which begs to ask, what is going to become of us?”